Surfacing from a dive


A spinal cord injury during a freak swimming accident rendered 30-year old interior designer Girish Gogia paralyzed below the neck for life. Two days before New Year’s in Dec 1999, amid friends and loved ones at Calangute beach, Goa, expert sea-swimmer Girish fell on his back in the shallow waters and suddenly unable to move, saw himself being washed towards the sea, drowning and unable to help himself. Luckily, an itinerant foreign woman tourist spotted him drowning and rescued him. He’d fallen unconscious but upon regaining it, could speak but couldn’t feel any part of his body and when rushed to the hospital, he was declared paralyzed below the neck, due to a severe injury to the cervical (neck) part of his spine- a condition as yet incurable. Being able to speak 20 mins after the accident saved his speech and brain.


Eighteen months of trauma, anger, shock and having to be cared for like a child followed- a harrowing time for Girish and his committed wife Eesha. 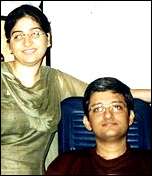 But past the anger and self-pity, Girish decided he didn’t want to live like a vegetable and decided to reclaim as much of his old life as possible.


The designer’s first project after the accident was the interior of a home, commissioned by the owner with faith in him. Since then he’s designed a shop and done the interiors of a residence and is in the middle of his current project- renovating an 18 year old building and doing the interiors of a jewellery boutique in Andheri.


Girish is helped in his work by an able and committed team. He conceptualizes and creates the designs, the material, fixtures required and the team puts his ideas into practice, meeting clients, sourcing material and executing the work with occasional visits by Girish to the location.


It is a story of grit with a determined smile. Girish still has to be cared for 24 hours completely, with conditions like bed-sores constant threats. A great deal of his time and the family’s expenses are spent on the long physiotherapy sessions Girish has to go through to improve the mobility of his limbs. A regular visitor to the Paraplegic Foundation in Sion, he is all praise for the care and attention of the place but laments that the place needs funds. Further “the absence of a rehabilitation center in Bombay for patients of spinal injuries coupled with general apathy visible in the lack of wheelchair-friendly ramps in buildings makes it worse than the actual fact of being paralyzed”, he says. At his physio sessions, he always motivates fellow-sufferers to accept their conditions but to not give up on life, because it can still be lived with dignity, with joy.


The couple pin their hopes on the ongoing stem cell research for a cure for conditions like Girish’s while they get on with their lives. Apart from the fact the Girish can’t move, he’s in no way inferior to anyone in his profession. “All we want is for people to look past his body and see the creative and brilliant mind behind and support him with work”, says Eesha, Girish’s committed, cheerful wife and constant partner. Surely, a call to go past our prejudices and salute grit?


Girish says his life changed the moment his question changed from “why me?” to “why not me?”.  With that has come an awareness of problems of people like him. His alert mind is groping for ways to do his bit for them.


Eesha’s own heroism is probably, even greater than Girish’s. For one so young, she has burdens of life’s odd plays to ponder and a loved one to care. She wants to find ways they can highlight the problems of similarly afflicted. Why don’t you send her a mail at or . They would like to share their experiences and spread the message of positivism.[Telephones: 020-26362017 & Mobile-9820627962].