◊Children in seven villages have produced a booklet listing chores and jobs they are happy to do and the ones they don't want to. Among the latter: milking, beedi rolling, washing clothes and fetching water in pots.
◊270 members of Bhima Sanghas between the ages of 8 and 18 carried out a comprehensive survey of 7,500 households in 24 villages, located in four districts of North Karnataka. With minimal assistance from adults, they designed the forms, trained the pollsters, collected data, sorted it and gave it for compilation. The survey covered profiles of all children in the target areas: their disabilities, education, work profiles, family links, problems and so. The survey that lasted a year from June 1998, yielded the data that Bhima Sanghas and Makkala Panchayats now work with, prioritising attention, targeting resources and planning ahead.
◊CWC runs a helpline called Makkala Sahaya Vani [MSV] through the toll free number 1098. MSV Bangalore logs 70 calls a day, handling complaints of abuse in schools, medical emergencies, child marriages etc. A transit shelter is now getting ready. MSVs are coming up in Udupi and Kundapur.

It's close to 25 years since Damu and Nandana began their battles on behalf of children. Nandana has played a key role in formulating UN's policy on children's rights. India, despite its difficulties with children related issues, has been a pioneer in raising awareness worldwide. Which is a lot more than you can say for a country like the USA, which till today refuses to sign the Convention for the Rights of Children. The very first meeting of the International Movement of Working Children was held in Kundapur, hosted by the local Bhima Sangha.

Bhima Sanghas' 14,000 members have formed themselves into a federation. Since the birth of CWC, whole generations of children have become adults and they continue their involvement as members of the Makkala Sabha. So, the creep of children's issues into adult consciousness is steady. In Udupi, Bellary and Sirsi districts' panchayats labour of children below 14 years ended and all under this age go to schools now. Migration of child labourers from Udupi has ceased. 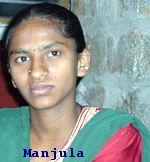 M Manjula at 18, will soon be an adult. She has been a CWC-child for a decade. She is a leader that adults would envy. She is the President of the Karnataka state federation of Bhima Sanghas. She was duly elected after a keen contest, by an electoral college of 19 delegates. She has travelled to Geneva as a representative of India's children. There was no culture shock or inhibitions in her. Nor any envy of the world she saw. Despite all difficulties endured in India, she's a proud Indian who says that children here will soon have a better deal.

That'd be because, some years before she was born, Damu saw the likes of her standing there - without hope.