Goonj: A ready to wear label for the poor[continued]

At IIMC Anshu was instantly in luck. His classmate was a vivacious girl, Meenakshi Trakroo. He wooed her, she responded and they married later. But that did not cause either of them to shut the door on the world and indulge themselves. They were both seeking a cause worth living for.

Anshu was freelancing for magazines even as a student. A series of experiences that didn't quite connect then, eventually led him and Meenakshi to commit themselves to their current mission.

When earthquakes shook Uttarkashi in 1991, Anshu went over with his camera. "Relief work was in full swing but it was not very sensitively done," he says. "The hill people are poor but they are proud. They were aghast at bundles of clothes dumped from moving trucks, literally on their heads. They withdrew and chose to wrap themselves in potato sacking cloth." Charity without dignity is an insult.

In Delhi's streets he once found a young man lie dead. There was an empty bottle of liquor and a full plate of uneaten food. "He died drinking to keep warm", whispered people who stood around. He had food to eat but not clothes to shield against the cold. Anshu met many young men who skipped job interviews because they did not have presentable clothes.

Habib: A trigger that started Goonj:

In 1991, Anshu, student and a freelancing photo-journalist stopped and stared at the tricycle with this sign: "Dilli pulis ka laash dhone wala". Translated it meant, "Disposer of dead bodies for the Delhi Police". The place was the crowded entrance to the Lok Nayak Jaya Prakash Narayan [LNJP] Hospital in Old Delhi. Of all the trades plied on India's humming streets, this had to be the most unusual. He found Habib and his blind wife Amana Begum standing by. The young journalist dug into the story. 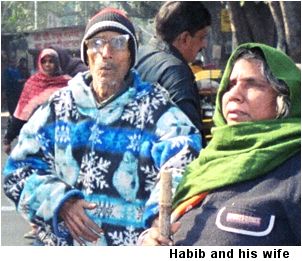 It turned out that there were numerous bodies littering the city's streets, that no one claimed. There was no foul play and so there wasn't any need for the police to investigate. Everyone around concurred the person died of entirely 'natural' causes. There was nothing to do but to dispose off the bodies. That's where Habib came in.

He was given Rs.20 and three yards of cloth for each body and away he went carting it to the nearest crematorium. News of a 'find' came from a policeman or the bush telegraph. Habib and his wife were busy and made a living.

Young Anshu was intrigued and followed Habib's tricycle for months. He was struck by the ways of an impersonal, fast-moving city. He wrote a feature on Habib just as several other itinerant journalists did. Was there nothing more to it? Anshu discussed this with Meenakshi, his class-mate. They couldn't shake off Habib's words: "The body count goes up in winter. I can barely cope".

Habib is 75 now and still plies his trade with his wife Amana and his hearse outside the LNJP. He was the chief guest at Goonj's seventh anniversary day. After all he had been a trigger that started Goonj.

Wonder if he has noticed a fall in the body count because of his friend, Anshu. That'd be good news and progress in sad India.