A school for the poor that the rich may envy[continued] 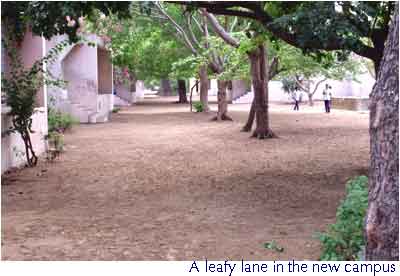 OMHS provides all class materials and uniforms, a welcoming bowl of grain porridge as children arrive in the morning, and under the government mid-day meal scheme, a hot lunch. H P Blavatsky Hostel run by OES, is home to 30 boys. [There's a fourth institution under OES, the Besant Animal Welfare Centre]. Amazingly, the entire service is free. Not a 25p is collected for even the application form.

There are 48 teachers who are paid a low average salary of Rs 2500/ month. Understandably, the 20% attrition rate is rather high, but the Principal says, "They go on a new career stream as better paid teachers. As most teachers are alumni, this can be seen as a placement programme."

It costs Rs.23 lakhs a year to run OMHS, of which a budget of Rs.2 lakhs per year reserved for nutrition alone. TS raises this sum from its members.[See notes at the end of this article for details on you can contribute.]

Between 1935 and 1998, OMHS was a government aided school, in that its operating costs were met by the state. This arrangement had its advantages but also several drawbacks. Primarily to put energy and enthusiasm back into the school, TS re-assumed responsibility. In 1999, Mrs Lakshmi Suryanarayanan joined as Principal and that year can be said to have begun the revival of OMHS. The nearby KFI School was co-opted as curriculum advisors and the new arrangement has re-energised the school.

Lakshmi was born in 1950. She was a brilliant student throughout. She majored in physics and after her BSc, earned a BEd as well. For a few years she taught primary school and was married at 21. She resumed her teaching career ten years later, once her two children had grown up a little. She taught in various cities where her banker husband was posted. But none of them was anything like OMHS.

"My last job before coming to OMHS was as Principal of Dr Radhakrishnan Vidyalaya in Mumbai," she says with a wry smile. "It ran in a multi-story building that stood on barely an acre. An incredible 5,500 children studied in three shifts and paid good money that no poor can afford to pay." Her pay was Rs.25,000 and at OMHS, it is Rs.3,500. Lakshmi though, seems delighted at her decision.