India has the second largest English speaking population in the world. ©

Prev: A space for Mr Pattnayak  |  Next: Surfacing from a dive

In 1987, the 430m Chikkapadasalagi barrage across the river Krishna, in Jamkhandi, Bagalkot District, Karnataka was built with people participation.  Siddu Nyamagowda who led the endeavour was propelled to big time for that single act. He was thrust into elections to fight Ramakrishna Hegde, defeated him and went on to become a Union Minister. He has moved on.


But the spirit carries on under the leadership of Ashok Tungal, who by a wide consensus, was the true force behind that barrage.


Ashok is a 45 year old civil engineer. He is also a well to do farmer of Mudhol, which is 25 km from Jamkhandi. But his full time work is to drift through villages to mobilise farmers to help themselves. 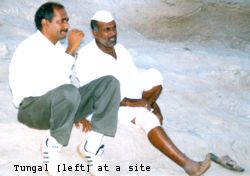 In the 30 years up to 1987, the government had built 6 barrages, riven with poor design and build, cost over-runs and delays. Since 1987, in addition to the Chikkapadasalagi across the Krishna, 3 more have come up across the Ghataprabha- because people got involved.


The one at Mudhol for instance, is 390 feet long and 12 feet high. It cost Rs 40 lakhs and was completed in 92 days. If the government had undertaken it, it would have cost Rs.1.2 crores and taken 3-4 years to complete.


Because the initiative came from farmers themselves, quality has been maintained. Completed in Dec,2003, the Mudhol barrage holds 45 million cft of water and irrigates 2000 acres in Roogi, Sorgaum, Jalliber and Mudhol villages. Farmers collected Rs.10 lakhs at the rate of Rs.1000/ horsepower of pumping installed. The government contributed the balance 75%. Many of the villagers worked as labourers [ Click for picture] and earned wages. No contractor was involved.


Tungal is an incorrigible optimist and believes that good work will find support from farmers. His enthusiasm has restored Jeeragal barrage which was built by the government during 1994-97 and was a failure. His recent project was Hirealagundi barrage with a bridge, built at a cost of Rs.53 lakhs, mainly supported by the government under its Nammoor Bandhaara Yojana (100 Barrage Scheme). The water storage in the barrage will irrigate 6000 acres in 10 surrounding villages. Also farmers in many villages like Kaladagi, Ankalagi, Junnur, Badnur etc., can easily transport sugarcane to Kandaragi sugar factory via this bridge-barrage.


Tungal’s efforts have changed the lives of farmers in several villages. Though quite a few in the region are clever enough to take the credit of Tungal’swork, smiles on farmers’ faces and revitalised borewells, catalyse Tungal to continue with his work. For a great communicator, he is a quiet man of few words you are unlikely to track down, as he is always on the move. But you can try calling [08353] 220 475 ,220 485 or 9448580575 [Mobile]


You can read the full Chikkapadasalagi story here.


This story is based on information and photographs provided by Anita Pailoor, a freelance journalist of Dharwad, whom you may mail at spailoor@sancharnet.in