Every evening between 4 and 8 O’clock, Kamalam, Kannan and their little son surrender their house to 150 children who swarm to it. The house becomes Bharatiyar Evening School. A sign on the house proclaims the name and adds: “No Fees”.


It’s a pleasant lower middle class street in Chennai’s Tiruvanmiyur area. The rented house has four rooms that the family lives in when it’s not a school. Children are from poorer households nearby. Teachers are modestly paid professionals or are volunteers. Kamalam and Kannan are also teachers. 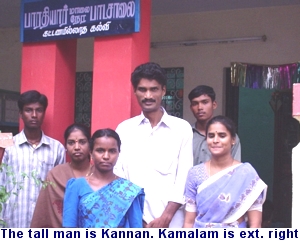 Kannan’s formal name is Savitri Kannan. It is unusual because he prefixes his mother’s name to his given one. Savitri is a public spirited lady. Despite raising a large brood on a modest income, she kept helping out her neighbours. She dinned into her children the need to serve society in whatever way they can.


Savitri Kannan, now 40, never forgot that. He’s a free-lance journalist for Tamil magazines and electronic media, specialising in social issues and human interest stories. His wife Kamalam is a trained teacher who kept bringing stories of poor children dropping out. “Of the 100 that join school when 5 years old, only about 10 finish 10th grade,” he discovered. Rest become child labourers.


When they opened their house as a school in 2001, just 8 children came. Parents were unenthusiastic. Within months however the numbers swelled to 50. Today there is an active Parents Teacher Association. The neighbourhood is involved.


The school supplements more than class work. There’s a large black board at the entrance on which the daily news is chalk-written for children to read and discuss. The school also invites prominent persons every now and then,to interact with children. During vacations there are arts and crafts courses. On festival days, children get together as a community. The school also works on their general knowledge, civic sense and hygiene awareness.


Formal education is not the primary objective of Savitri Kannan, though even on that front children are doing well. “I want children to stay off the labour market and let them savour their childhoods,” he says. There is evidence he has managed that:  at the appointed time, children run in squealing with happiness, clean the place, whip out mats to sit on and await their lessons with great eagerness.


While offers of donations are welcome, he keeps the operation manageable. “I don’t want to grow too fast and start worrying about money instead of my mission,” he says. It costs him just Rs 10,000 a month to render this service to the neighbourhood. There are three or four people who pick up the bill and only occasionally, does he need to chip in.


Efforts of Kamalam and Savitri Kannan have certainly impressed their landlord Palaniappa Chettiar: when the rent of Rs 8000, became unaffordable, Chettiar dropped it to Rs 5000, lest the Kannans and children should move away from him.

eMail:
[Donations are eligible for tax relief under Section 80G]