But of the three young women who founded the Shristi in Bangalore in 1995, only Suchita Somashekhariah was a mother and her children needed no special care. But she had been driven to this calling because a cousin's child had been special. In 1984, a road accident had killed that child and a few close relatives. Suchita reacted by joining the course for special educators at KPAMRC. Meena Jain was raised in Mysore in a family that had fallen to hardship after her father had died early. "We were poor. Mother worked hard, raised and educated us. But that didn't stop her supporting a few children poorer than us," says Meena, by way of explaining how she has committed herself to serving others. For Sharon Watts too, her mother was the inspiration. Sharon was a bright student and her father wanted her to be a journalist. "But Mother made up my mind without ever trying to influence me. She was a tireless, smiling nurse in Whitefield. Her obvious happiness and contentment struck me deep," says Sharon. 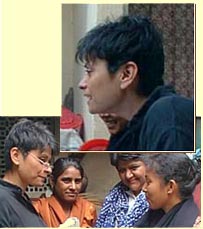 Neeraj is Merry Barua's only child. Twenty years ago she discovered he was autistic. Looking around, she realised, there was no organised counsel or help. So Merry took herself to the USA and learnt how to care for him. How? She closeted herself alone with her son in a room for 11 long months. That helped her understand this puzzled visitor from another planet

In 1991, she started in Delhi, the sub-continent's first school --'Open Door'-- for special children. Since then her reach has grown nationwide through her resource centre, Action For Autism.

Merry Barua is widely acknowledged around the world as a pioneer and tireless worker in the cause of autists. She is an educator, communicator and social and political activist. Above all, she is an inspiring role model for many despairing parents.

When she was a baby, her grandmother would call her, 'Meri Jaan' ['My darling']. And that's how she got the unusual name, 'Merry'. Her grandma had been quite prophetic. But not entirely-- she didn't know Merry would become more than just *her* darling.

For close to 30 years, parents in Kolkata have been running the Indian Institute of Cerebral Palsy. Learn more about this private and volunteer initiative by unknown Indians, and maybe support them. Here's the link.