Rural folks' cancer deaths are less talked about than their suicides, but the scale and causes are the same.

In 2001, Jarnail Singh, a recently retired schoolmaster of Jajjal village in Punjab's Malwa region, began a macabre hobby. For about 5 years he had frequently been within earshot of villagers in small subdued huddles: "It was cancer", they would whisper and roll their eyes about as though to spot a lurking devil.

Was it actually at large, scything through people or was it all just rumour? Jarnail Singh decided to keep a meticulous record of cancer deaths. His list began to grow ominously. Within the next year, the village of Harkishanpura publicly advertised that it was offering itself entire, for a distress sale as its economy had collapsed, following loss to cancer of a majority of its agriculturists.

What could the matter be amidst the miles of green fields, in the home of India's Green Revolution? How could sturdy, prosperous, hard-working Punjabis be felled with such ease? When Jarnail Singh released his statistics, the ground under paradisal Punjab rumbled. Soon the connection was made between the cases of cancer and the drinking water polluted with leached agricultural chemicals

This story is not about that event. The depth of the problem is well detailed here. Our story is about Umendra Dutt, how he reacted to the news and how what he is doing is the only thing you can do about any problem: take responsibility for the solution and look for people to share that responsibility.

Umendra Dutt's grandfather Pandit Hiralal Sharma was of the heroic stock of his times, a stock that Gandhi produced out of ordinary men. Pt. Sharma had quit a lucrative government job heeding Gandhi's invitation to join the movement for non-cooperation with the British rule. Soon after Independence, the family had moved from Rawalpindi, now in Pakistan, to Ferozpur where Umendra was born, in 1962

"I did everything but study in school; I hated the class room," says Umendra. He organised sports, theatre and music events. He played hockey, painted and was fond of writing. He imbibed nationalism from the portraits Chandrasekhar Azad, Bhagat Singh, Sukhdev and Rajguru that hung from the walls of his home and their legends that lived in the bazaar.

And he was a serial runaway. "I kept going away, to various places, mostly religious centres," he says. Finally when he was about 14 and went missing for four months, the family at last got the message about formal schooling. The search party tracked him through Banaras, Hardwar and found him finally in Nemisharanyam.

"Do what you want, but stay at home," conceded his father Har Dutt Sharma, a clerk in the Life Insurance Corporation. Umendra completed his Masters in Hindi via a correspondence course and developed a facile writing ability. And he joined the Rashtriya Swayam Sevak Sangh [RSS] in 1981 and rose to be a Pracharak. The role suited the wandering, nationalistic communicator in him.

For two years he was a full time activist of ABVP, the students wing of the RSS. "Our response to every issue had to proceed from just two prescribed contexts: partisan politics and India's hoary past," he says. He gained many things in the RSS: the skill to motivate and organise people, discipline and frugality in personal life, commitment to assigned tasks and the friendship of many sincere people. But he also sensed he was missing something. In the entire RSS -which was full of dedicated people- he admired just three men: Dattopant Tengadi, Nanaji Deshmukh and Eknath Ranade. What was it about them that drew him? He had no answer that amounted to a lesson.

Between 1992 and 2002, Umendra was posted in Delhi, to edit and publish the Swadeshi Patrika. It was a magazine to propagate arguments against the so-called 'economic iiberalisation', a cunning euphemism for a policy that would stymie micro initiatives of Indians. Work as a journalist led him one day to Anupam Mishra who Umendra thinks is one of the great living Indians who should be heard widely. Mishra told him that any work that strives for change must be rooted in two things: party-neutral politics and spirituality. Politicians should be cultivated but across party lines. The successes of Tengadi, Deshmukh and Ranade was at once explained. They had friends and admirers in every political party because their work had transcended the narrow RSS ideology.

When Harkishanpura offered itself for sale because its resources- natural and human- had depleted, the cancer scandal played out along predictable lines. Journalists raised the noise level, legislators visited the scene, the government ordered an investigation and finally the Pollution Control Board confirmed the obvious: extensive pesticide use had polluted the drinking water. The government banned some pesticides and promised safe water and treatment for cancer. And thus it has came about as a final solution, that clusters of stricken rural folk, daily wait on Platform No.2 of Bhatinda junction for the train they have come to call "marizon ki train", the Cancer Express to take them to a hospital in Bikaner.

A puzzled Umendra walked away and started to think it all through. He too had reported the story, but where did the story really begin? The Malwa region of the Punjab consists of 12 districts [Firozpur, Moga, Ludhiana, Sangrur, Barnala, Mansar, Fazilka, Bhatinda, Muktsar, Faridkot, Patiala, Fategarh Sahib]. Historically it had practiced rain-fed agriculture, growing wheat, pulses and millets. During the Second War, Revenue Department officials seduced them to grow cotton, which brought money instead of mere health and food. Then in the 1950s waters from the Nangal Dam reached almost everywhere via canals. Shortly thereafter came the Green Revolution with magic seeds, instant fertilisers and a buffet of pesticides. What a feast the farmers made of it all. Money and concrete houses were sprouting everywhere. Women who were such an influential, integral part of farming were sent home by machinery for everything. Life and culture which were a part of food growing were separated by regimented crop production. 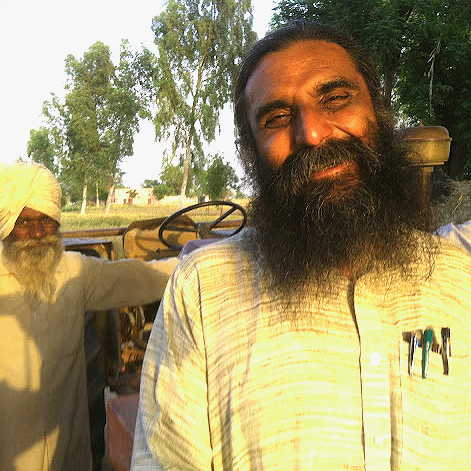