Soil and soul connect with Sanskrit at Melkote[continued]

Between running around for funds to construct the Academy buildings Thathachar has remained focused on letting nature rebuild desolated wasteland. When some old houses were being demolished in Melkote town, he discovered the walls were made of rich red earth. His Hallikars ran convoys for days carrying this rich rubble to his rocky estate. The clumps were broken down and spread everywhere. He restored eight lined kalyanis and unlined ponds within the campus. He harvests no more than half the fruits and flowers. "It is the way of the wild. One takes what one needs and lets the rest feed the birds and animals or drop to the ground to rot. Modern farming thinks it is smart to maximise produce and wipe it clean. The ancient way was to live with nature, not treat it as a profit centre," he says. 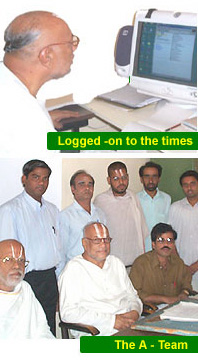 From land to knowledge:

When the handsome centre was eventually built it stood in a micro landscape that approximated to what the ancient texts described. From there he leapt to very modern times. It was a time when desktop computers began to be affordable. Thathachar was quick to scent their importance and relevance to his work. He soon became an adept. "I simply exposed myself to it and realised its potential," he says by way of explaining how he can handle all the gear and understand how programming languages work.

The Academy began to publish authentic English translations of Sri Ramanujar's works as also treatises on Vishishtadvaita. He began to collect works written on palm leaves. He went all over south India and householders happily gave him their heirlooms. "This is what is marvellous about an India not yet gone 'modern'," he says. "In the West people would hand these to Sotheby's for getting the greatest price; the people I met gave them away when I told them I would care for them." He has a collection of over 10,000 palm based texts, 850 rare old paper texts and over 25,000 books -- all related to Sanskrit. A large bowl of lemon grass oil is constantly kept warm amidst the array of shelves. It is enough to effectively preserve the treasures.

The Academy has state of the art facilities for digitisation of vulnerable texts. It has an in-house printing press. Thathachar has gathered a team of Sanskrit scholars from all over India to organise the texts for publication. The Academy also publishes media for popularising Sanskrit learning. There are lexicons and commentaries for students.

With passing time however, it is becoming clear that Sanskrit is just the visible skin over a vast throbbing organism called cosmos. "How silly to think Sanskrit is a language for a ritual or a religion," he says. And then asks: "Tell me how you translate 'gyan'? You'd say knowledge, knowledge system etc and you would still not have captured the spirit of the word. The closest perhaps is, 'right and total knowledge of the cosmos'"