Learning to work the ropes[continued]

It was 4 pm. I pointed out details of the illegally transformed land. He was irritable and kept asking me what was my interest. I retorted that it was safety of state lands Overnight MGM had planted tiny coconut saplings all around. The JC asked his staff to count them. I was aghast. 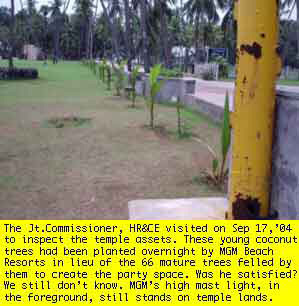 That day I realised the power and reach of MGM. It was a crushingly lonely moment. Energy had drained out of me and the obstacle seemed insurmountable. ECCO's members had lives to lead and careers to follow. Fishermen had livelihoods to think of. By now, they were nearly convinced I too would fail where they had already done in evicting MGM.

After an agonised night, I decided to call magazines and papers. I began to lead reporters and photographers to the disputed land and to the fishing village; I urged the reporters to ask MGM and HR&CE for their sides of the story.

Tamil media was more willing to dig the story than the English press. That was logical: MGM's glossy ads were carried only in the English media. Many came, did the rounds and many even photographed parties in full swing.

Not all published stories though. Owners or senior staff would kill the story for many reasons. But before that happened diligent reporters would have rung up MGM and the HR&CE for their comments. This turned out to be enough pressure. Also a few stinging reports did appear in the press. It took the issue to truth time.

On Sep 24, 2004 the EO of HR&CE finally petitioned the Sub Ordinate Court, to implead himself in the case. His sworn statement carried these sentences: "The last licence granted to the Petitioner [MGM] for enjoying the usufructs expired on 30-6-2004 . There was no lease of any land as alleged by him... The Plaintiff has illegally trespassed the suit land and formed a lawn... The Plaintiff who is a trespasser, who has no right over the suit property and who has committed an act of trespass and who is making wrongful use of the suit land without the knowledge and written authority of the Department, has obtained an order of Injunction behind the back of the temples [the real owner] by misrepresenting facts and suppressing the truth. The plaintiff has neither a locus-standi nor any cause of action to file this suit..." Four years after seeking it, we had the truth.

The Ad-Interim injunction against Chettiar was vacated on October 14, 2004.