Learning to work the ropes[continued]

At 1 pm, the jeep of DSP M S Rathore with a few brisk Inspectors raced in. He at once asked for me by name. I went over and patiently explained with papers, that it was not MGM property, nor had they any lease to it and the villagers were gathered for nothing more than worship. He was a reasonable man who seemed persuaded. In a moment, a junior came rushing to him with a live phone. The DSP listened for a few minutes and he was a man transformed.

"Mr Sridharan, I want to hear no more of your explanations. I am arresting you for disturbing the law and order," he said, politely but firmly, avoiding my eyes. I was rough marched to a jeep and sped away even as the villagers began to howl. I heard they were lathi charged and dispersed in a few moments.

On the speeding jeep I managed one call to Navaz before my phone was snatched away. I was taken to a new police station whose location very few people knew. It took hours for Sabita to find me. Other members of ECCO called lawyers and journalists. The DSP told them that Sridharan would be produced in Court the next day and they could find out there what he was being charged with. My friend and counsel, T Mohan and human rights lawyers Dr Suresh and Ms Nagasaila argued for four hours and made many calls to civil servants. ECCO members and villagers stood a vigil outside and journalists questioned the police persistently. MGM's grip loosened at 9.30 pm. I was released without being charged.

Newspapers reported the arrest. Villagers went in a delegation and made an appeal to the CM's office. I wrote to the DSP, M S Rathore. I filed a complaint with the Human Rights commission and presented the whole case to the CM's Secretariat. And we waited. The police kept everyone out of the temple lands. That was some success after four long years of struggle. 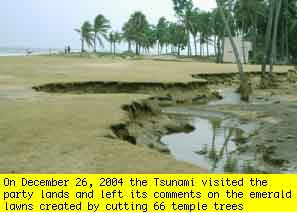 On December 26, 2004, ten days after my arrest, the tsunami paid a lightning visit to MGM created party lands and left its comments. We may as well let Nature have the last word on this tale and after a pause, go on to ask why this story belongs here.