The Jaipur foot costs about Rs.1,300 to make.[The beneficiary of course pays nothing]. It can be made by an averagely skilled team of five, which can produce 15 limbs a day. But that is not the end of its merits. It's a limb that is suited for Indian use. Wearing it, one can work in the fields, run, pedal a bicycle, squat on the floor or even climb a tree. In contrast, a prosthesis from the West is mostly cosmetic.

True art seeks no prize:
Pandit Ram Chandra Sharma's family has lived in Jaipur ever since the city was conceived. His ancestor sculpted the idol at the Amber Palace temple. Masterji has studied only up to Class 4 but his blood probably carries all the lessons he needs. He is versatile on paper, canvas, stone, wood, glass and metal. Being curious, he investigates every modern material and manufacturing process. 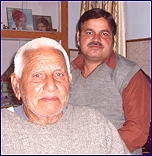 He is a fit 85 and rides a 50 cc moped every day to the Malaviya Nagar centre of BMVSS and potters around- experimenting, supervising, counseling and mentoring. In the evening, on the ride back, he stops at the vegetable market to shop for the family dinner. He is an uncomplicated man and evidently very content. Though many are agitated that he received neither credit nor a share of the Magsaysay Award money, Masterji himself has no grievance. In fact, he admits he could not have brought the innovation to the world's notice. "I am glad it happened and many have benefited," he says.
Recognition may have eluded him but the gift of art flows on in the family. His son Kishan Lal Sharma -who also works at BMVSS- has developed a knack for custom moulding cosmetic replacements for severed noses and ears. He uses an imported mouldable compound used by plastic surgeons. "You would be amazed how many people lose these in rural India." he says wryly. He tries to make an indistinguishable fit. He feels satisfied at the happy difference these small prosthesis make in people's lives.
Masterji is but one of India's perennial stream, insufficiently celebrated by the 'educated' classes. But for them, there would be no India story.
...
Plot No 20, Suman Vihar, Imliwala Phatak, Krishna Nagar, Jaipur 302005, Rajasthan
Phone Home: 0141-591214   Kishan Lal's mobile: 0-98280- 70311

Masterji's original creation was in wood and then aluminium. Later, while visiting a pipe factory in Hyderabad, he was struck by a narration of HDPE's virtues: light weight, low cost, mouldability and strength. He grabbed a few lengths and returned to Jaipur. In a few days he had re-invented the foot again. Today body coloured HDPE pipe is manufactured specially for BMVSS use.

To scale up delivery, BMVSS conceived fitment camps. These are held all over the country. Schedules are published at their site. Local chapters screen and line up people in need of prosthesis. Expert team leaves Jaipur complete with equipment and materials. There over several days, limbs are fitted practically at victims' door-steps.

By the way, BMVSS supplies more than the Jaipur foot. For a start, there are above-knee and below-knee prosthesis. For polio victims calipers are supplied. For those cases that cannot benefit from either of these, hand-driven tricycles and crutches are supplied. Of late, they have begun giving hearing aids, as well.