A passion for excellence lavished on toilets.[continued]

Fuad knew he had a hurdle. Given his specifications, each of his dream loos would cost Rs.10 Lakhs. And that is big money in India. He sat with his indulgent wife and daughter and discussed the deadlock. Suddenly Mehru said, "Hey, if it's going to be upmarket, why don't you get upmarket advertisers to support it?"

In a few days, Fuad had made a model, prepared a business plan and a formal request that said more or less, "just give me the permission and I will provide a service India can be proud of". He got the permit. He reminisces now: "Yes, it's not simple in India. But doors do open for those that are sincere. Most of the time our bad mouthing the Indian system, is to do with our tendency to seek alibis. I found a receptive bureaucrat and a politician who backed me."

The Great Wall of Ads:

But no one was going to give him money to build a loo. He formed Fumes International Company, and decided to put his own savings on the line. "If I am an entrepreneur worth my salt I must take risks," he told himself. He began to build his definitive toilet in one of Delhi's in-places - Khan Market. He lavished all his care and attended to every detail. Mehru an interior designer was with him the whole way. It was not to be just a tucked away loo, but a high profile object of style. When it opened in late 1999, it was a hit at once. Almost always in India, we build great edifices but pay little attention to how we would maintain them. Fuad was firm from the beginning: "my toilets have to be inauguration clean forever." He had spent time in planning maintenance, training his staff and they paid off. 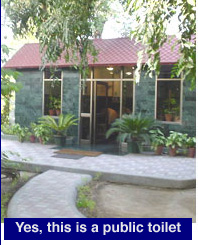 After five years they are spotless. Two attendants clean after every use. A watchman guards it between 10 pm and 7 am. Visitors are delighted. An affluent lady says she uses it all the time. Bernie Fernandes, a working woman says, "I feel so safe, relaxed and comfortable." A highly impressed Robert Kinfarley, the head of World Health Organisation [WHO], in Delhi sent his staff to Fuad's toilet for training. Clearly user endorsement was gathering. Visitors are charged a token Rs. 1 and Rs.2, just to induce a sense of responsibility.

Though it took him over six months trying to persuade advertisers to support him, he was certain he had a USP: foot falls of the spending kind. Early mind blocks were blown away. Big names were eager. Fuad's toilet walls are not cheap to advertise on. The income from ads enables him to pay great wages, make a nice profit and build more toilets. He has 11 in Delhi so far, in places like Connaught Place, Lodi Gardens, Sundar Nagar, Golf Links etc. Each is a unique piece with marble, granite, chrome, plants, aquarium and above all with that heavenly peace that reigns in great washrooms. Fuad is forever making the rounds. Are the sills clean? Is the soap in the right place? Is the plumbing drip free? He's a perfectionist.