A passion for excellence lavished on toilets.[continued]

There is some concern now that his business model is stoking greed and quick grabbers are moving in. Fuad is worried that the idea of cost free, public sanitation may lose out if cronyism creeps into city administration. There are now about 80 toilets based on the Fuad model. He hopes all would pay attention to upkeep. But there is a built-in safeguard in the idea he has pioneered: if a toilet is run down, it won't attract advertisers. 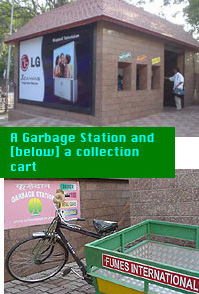 Fuad is now attempting to make garbage pay. He has built collection and sorting centres where again advertising will pay for the process. He admits it's not a commercial success yet. And he has begun to ponder what else he should be doing to improve India's image in terms of public sanitation. So the question arises, what about toilets for the poor and for small towns? This questions has been asked in the past and almost always been answered wrongly. Tokenism has ruled and subsidies and handouts have steadily been siphoned off. In the end the poor get unusable toilets.

Fuad says, let entrepreneurs in and they will create the right commercial product. Has not C K Prahlad, the management guru said that Indian entrepreneurs are ignoring the huge market of the poor that exists in India? Bottom up planning is good when you are talking of livelihoods. When it comes to behavioural changes, the process is always from top to down. Given TV, travel and visible changes in the cities, the poor --whether or not you like it-- wish to ape the rich. Computers, education, mobile phones, grooming, and lifestyles are being mimicked. Why not toilet habits?

So how do you build toilets for slums and small towns without subsidies? Fuad has a brilliant idea: build quality spaces but to offset for the fact that premium advertising may not be forthcoming, run a shop attached to the toilet! He is yet to try out but is sure it will work. It would need of course new thinking on the part of local governments.