India has the second largest English speaking population in the world. ©

Prev: A fresh insight into changing India  |  Next: The Indian edge in education

Punamchand Singavi stands under five feet. He is an accountant by profession. He is well to do. He is 62 years old. When you add these facts together they are unlikely to reveal what he really is today: a giant of a man with a heart that beats for the environment. 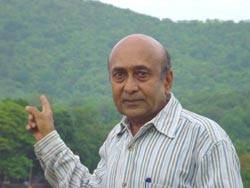 Singavi is an urban man. He was for more than thirty years the senior partner of Singavi, Oturkar and Kelkar. He also lectured on accountancy at Poddar College. He sits on the boards of many companies. No intimations of an environmentalist here.


What made him one was what he observed over the years. He saw Thane opening up to people crowded out of Mumbai. High rises began to darken the sky. Building rules were liberalised with scant regard for the environment. To meet the building boom, the lovely hills around Thane facing Godbundar Road began to be gouged for building materials. Where once panthers roamed, even birds became scarce.


Singavi pondered these degradations and decided there was no point in waiting for ‘someone’ to act. He quit his partnership to work full time on greening Thane again. He founded Hariyali in 1996 with 15 friends. Today it has 300 members, an active hands-on programme, a sustained awareness campaign and a website. The results have been striking. The hills wear a green patina again.


Early years were indeed hard. They were spent mostly in spreading awareness. Amazingly for a city that receives over 2000mm of rain per year, water was becoming scarce. 30 lakes covering well over half a million square feet in surface area exist-- but almost all of them have been allowed to silt up or over run by water hyacinth and quarry sludge. Not a drop of rain water was being saved with any design.


Hariyali from the beginning had emphasised shramdan [contribution of labour]. They began slowly. A group of enthusiasts would climb the hills after the rains and start planting seedlings.  As this is not year round activity, members began clearing the place of plastic bags-- and using them to raise seedlings. Hariyali organises awareness treks for the young and old. The dedication of the core members has paid off and Hariyali today attracts people from far off places. Hema Gupte says, “I know school kids coming by bus from Sion which is 30km away.” So far a total of 35,000 youngsters have participated in Hariyali activities.


Plantings and caring for them are top of the activity list: 50,000 so far. They plant the slopes, the ridges and along ghastly looking pipe lines. When the monsoons have abated a little, members squealing with delight are swarming everywhere planting seedlings. Then come the surveys of species and cataloguing them. Some like Anantmul [Tylophora Indica] are rare and not known to have existed here. Members design and build bunds to channel rain water. This turns quarry pits into water bodies, If the quarry ponds are protected well and connected they could ease the water shortage.


Officialdom is beginning to be interested. Hariyali’s people power is not easy to ignore in a election centred democracy. Forest officers are ready to help. Municipal officers are willing to take Hariyali’s plans seriously. A resort near the Konkanipada lake that Hariyali had revived used to be mauled by weekend picnickers. Monday mornings would find the area littered thick. At Hariyali’s urging, the area has been cordoned off.


Overall Singavi is a satisfied man. In six years Thane has changed—for the better. “Five years ago I was leading a small group across barren, brown slopes of the Yeoor hills. I asked them: ‘Have you heard of Sanjay Gandhi National Park?’. One of them answered: ‘It is in Borivli, isn’t it?’ I had to sadly inform them they were standing right on it.” Today things are beginning to turn around.


“We are trying to pay back a loan forced on nature over the last fifty years,” says Singavi. But the repayment does not cost too much money. Hariyali members pay a nominal subscription. “Money doesn’t matter. Participation does,” says Singavi.


So, he does not seek money on behalf of Hariyali but would like people within reach to participate in its activities. Of course, if anyone reading this can persuade officialdom to assist and encourage Hariyali more, the hills of Thane would be grateful.