India proves that diversity in society --just as in nature-- gives immunity and longevity. ©

Prev: Toxic wastes reclaim land  |  Next: Another surprise from Bihar

Education may broaden minds; but it is not necessary. There have been several unlettered masters in India’s tradition. Is 70 year old Shivdutt Pandey one of those?


Reader Navin Bhatt on a visit to his native Uttaranchal village of Jaulagaon discovered this man who seems to be a part of some bygone epic. 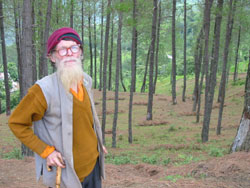 Since the age of 14, Pandey has been nature’s boy. He has constantly explored ways of augmenting incomes of the many small landholders that populate the hills. He himself has a small holding which he has turned into a laboratory. He attempts to cultivate profitable crops and studies their adaptability. Then he propagates their cultivation among the hard-pressed villagers. He has tried out teas, herbs and is finally convinced that geranium cultivation is a key to riches.


Geranium oil is used in perfumeries and fetches upto Rs.70,000 of profit per hectare. This self taught expert has become the source of all information on the subject. He actively assists his fellow men to switch to this lucrative crop. Here’s more on geranium oil.


That is not all there is to this grand old man. He is a water harvesting enthusiast who has tried out many solutions. In the photo you can see his delightfully simple, final solution for sloping grounds: large holes bored into the soil. Pandey is also a medicine man who tries to persuade villagers to try herbal remedies first.


Pandey born a Brahmin, practices a trade handed down to him: he dispenses the various ritual services the villagers seek. But he is no elitist Brahmin. He left his ancestral home long ago and lives among the Dalits today preaching his development model. In recognition of his decades long search for his village’s development, he was decorated recently by the State Governor.


Navin Bhatt who hails from the same village concludes: “We talk about correcting history in school book syllabus and so on, but I feel Pandey’s outlook is what a student needs to learn, to get inspired, to make a contribution towards society; rather than cramming up useless stuff to be forgotten later on. I did my graduation from a premier engineering college but I feel humbled before the determination and dedication of the people featured in GoodNewsIndia for their simple and pratical solutions.” Pandey surely belongs with them.
____________
Getting to Jaulagaon, Uttaranchal: Approach Bageshwar from Almora. Take Kanda Road. After about 18 km you are Ghingarutola, where Pandey lives.