India’s hunger problem—though diminishing—is not one rooted in inadequate production but in poor distribution. The contours of the problem are different in rural and urban India. In cities there is food aplenty. Hotels routinely throw away a lot of food. If there was a system to distribute this good, cooked food one could bring a lot of cheer to hungry souls. A project to redistribute surplus food was running in the north. V N H Rau in Bangalore read the story three years ago. And decided to replicate it. He was 74 years old then. 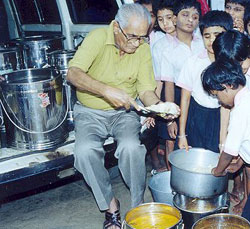 But he had been in social service for many years before that. He had retired as a senior officer from a Tata group company and turned to a spiritual life. That was how he met Mr.U B Kushalappa. He was a low ranked air-man who after retirement became a leader of a group working with children’s health and education. Rau was a part of the flock. When he was planning to start the food distribution system in Bangalore, Kushalappa had just died, aged 78. Rau formed the U B Kushalappa Memorial Charitable and Service Trust.


Spontaneous contributions came in. They bought a used van and some large stainless steel containers and the project rolled out. Every afternoon, they would collect large quantities of surplus food from reputed hotels in their neighbourhood, bring it to Rau’s garage, sort the food and drive off to orphanages to distribute it.


Soon the hotels got enthusiastically involved and began to suggest they collect left overs at night as well, as the quantities were considerable. So the project scaled to twice daily collection. They installed freezers in the garage and stowed the food overnight to maintain quality. The work ends everyday around midnight and begins mid morning.


A driver and a volunteer ride in the van collecting food. There are 13 volunteers today who take turns. They are typically highly paid, young computer scientists. The project also employs a maid to spotlessly clean and maintain the vessels. Currently they operate in the HAL - Indira Nagar areas. The participating hotels are Hotel Airlines, Ajanta, Woodlands and Nandhini Palace. Food is distributed to 400 souls residing in East West Residential School for the deaf and dumb, Dominic Ashram, Namme Mane home for destitute children in acute distress and a home for abandoned women run by Grameena Mahila Sangha.


Rau is an active participant and marvels how everyone contributes and feels a sense of fulfillment. They are a part of the faceless army India-wide that does the work that needs to be done. Rau says the time has come to replicate the project in other localities of Bangalore and take it later to other cities. “Amazing how a little capital and volunteer time can impact on a wide cross section of people. A waste disposal problem turns into an answer to hunger,” he says. First costs run to Rs.3 lakhs for a used van, freezers and vessels. Recurring costs are about Rs.15,000. If a corpus of Rs.15 lakhs is created and deposited in a bank, he says the project can run forever.


He invites support and correspondence from all who are fired by an urge to do something for India. Synergies are good here and there is room for you to come in at the level convenient to you.