Since 1932, factories of the DCM Shriram Group have sat on the banks of river Kali at Daurala, about 14 km north of Meerut, in western UP. Laid out over 300 acres, their factories produce sugar, liquor, pesticides, fine chemicals, drug intermediates and textiles. Abundance of water in western UP was the draw. For over sixty years there had been no one to check the pollution -nay, poisoning- of air, water, fields and the people.


Then came Janhit Foundation and turned the matter around in just two years. In a country where we throw up our hands and walk away, lessons from Daurala are worth imbibing. 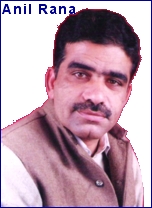 Though he was a native of Meerut, Anil Rana, now 44, did not realise until 1998 that his true work lay in his own back yard. He was teaching English at Kurukshetra University and enrolled to pursue a PhD at the Jawaharlal Nehru University. Instead, he was indoctrinated there by the company he kept, on the importance of environment. Switching careers, he returned to Meerut and started the Janhit Foundation to promote non-chemical farming.


Water rich western UP could live with chemical abuse for many decades. Daurala’s factories were in fact getting rid of their effluent water, by passing it off to farmers as enriched water.  Over time, as pollution increased and water became unusable for agriculture or even drinking, it got to man. Once a robust people, people of Daurala began to sicken often. And they began to die in greater than normal numbers from previously unknown diseases.


Poor families were spending over Rs.300 per month on medical bills. They had exhausted immediate avenues of redress and learnt to live with constant eye irritation, skin disorder, gasteritis and neurological problems. Water looked and smelt foul and 174 hand-pumps were abandoned.


It was a classic equation that plays out all over India even today. The offender is able to buy out lower and middle level officialdom. Quite a few of the poor, labour as his employees and lose their will and voice. Handpicked strongmen in the village society are primed with money. In places like UP there is the additional threat of exemplary murders. What’s new, you ask? What can one do faced with such odds? Let’s look at what Anil Rana’s Janhit did.


First he went over and met the villagers to ensure that they indeed wanted assistance. “Without people wanting action you get nowhere,” he says. Which implies sadly, that redress will only follow suffering in many parts of India for a very long time; just governance will not naturally occur. He then educated himself on the support resources that he could draw on. He found there were many for those willing to seek. The Centre for Science and Environment in Delhi was one. They conducted a study of Daurala’s water in 2002 and declared it unfit for humans and animals.


Humanistic appeals to the DCM Group based on those figures failed; they disowned all responsibility. That’s when Rana wisely decided to bypass the polluter and officialdom, and sought other forces to muster. He found that an Indian, contrary to his habitual claim, is not without help. His casual connection with Toxics Link, led him to the Blacksmith Institute in New York. This organisation brings pressure to bear on polluters worldwide. It’s founder Richard Fuller and Peter Hoskings visited Daurala in 2004, surveyed the scene, met stone-walling DCM officials and counseled Rana to get a fresh, independent study done by an IIT. Blacksmith Institute paid over Rs.4.00 lacs for the study. So good-money came to face off big-money.